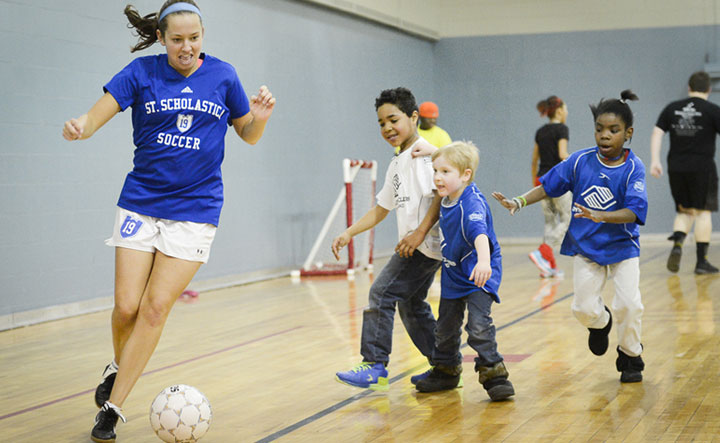 Men as Peacemakers (MAP) was founded in 1996 with a mission of fostering and developing peacemakers through modeling, mentoring, storytelling and dialogue. The mission stems from the recognition that violence ends and peacemaking begins when healthy lives and relationships are developed. MAP believes that creating peaceful communities requires intervening early in the lives of young men and women, educating them about the underlying causes of violent behavior, and supporting them while they transform their personal lives.

One of the many community programs of Men as Peacemakers is the Champion’s Initiative – a sports-based violence prevention strategy that is changing the culture of athletics in Duluth to reflect respect, nonviolence and gender equity. Champion’s weekly sports activities at the Boys and Girls Club and other youth serving agencies are providing youth in the lowest income areas of Duluth with positive, safe, environments where sports are coupled with violence prevention conversations and messages. This year the program has brought together 35 college athletes with over 200 youth for 90 hours of activities and discussions.

In the fall of 2013, the Lloyd K Johnson Foundation provided Men as Peacemakers with a second year of grant funding in the amount of $20,000 for the Champion’s Initiative to build and sustain the great work the program has been doing in the Duluth community.

Currently, the Champion’s Initiative has partnered with Parks and Recreation to provide activities at the Duluth Heritage Center for 50 youth every week. Weekly sports activities are also being provided for youth participating in East Hillside Patch, and American Indian Community Housing Organization programs.

The Champion’s Initiative also actively works to harness the potential of athletic coaches to role model respect and prevent violence in the community. Current activities include the roll out of an e-learning module that will be mandated for all Minnesota high school coaches in the coming season, a community forum involving leaders in the Duluth soccer community, and development of on-the-ground trainings that will be implemented with community athletic coaches in the summer.

The Champion’s Initiative is bringing together youth and college athletes, offering children in the community who have limited access to sports the chance to excel in athletics while being surrounded by positive role models.

Learn More About Men as Peacemakers